Part 1 can be found here.

Almost an entire year after the initial deadline for the groupbuild, this project is finally finished. Yes, I know. I really thought that the smaller scale would help, but it didn’t. 🙂

Nearly finished all the way back in part 1, the land-ship didn’t need too much work. I resumed the weathering process on it by doing a small pin wash. Luckily, WWI tanks are rivet-central, so that turned out pretty good. After cleaning it up a bit, I decided it was about time to try out something new.

Over the years, I read quite a lot on oil paints and how cool they are, but I never really expected to be this amazed. You basically get so many options… using small drops of paint to do washes, filters, grime, scratches… it just never felt easier. And because they take ages to dry, if you don’t like how it turned out, you can just wipe it off.

For the Mark I, I only used oils for doing the mud and rust streaks, but what really got me excited was applying the oil-dot filter technique on my work-in-progress Maultier (coming soon to a blog post near you).

After clear-coating the model, I applied some pigments to the tracks. With this, the tank was pretty much finished. Onto the diorama!

My first ever scratch-built diorama, what an experience! Starting from a regular kitchen cutting board, I traced down a diagonal road that would split the scene in half. On one side, a medical crew would be tending a wounded soldier. On the other, a bomb crater would be waiting for rain, wind and time to bury it back in the depths of history. Somewhere along the road, the army have used their shovels to raise a road block for supply transports. The tank would have no problems in going over it, though.

Using some modelling clay, I started sculpting the elements for the diorama. Applying water and carefully stretching the paste, I managed to make it completely cover the wood. If you’re curious, I used a brand called DAS Modelling Clay, the white version. It worked well, although it stunk the room for well over 2 days, until it dried off. I also bought some Mr. Diorama Clay that I will definitely try out in the future.

So after the sculpting was done, I carefully imprinted some track marks along the way. Also, using a sponge, I gave the field surface a rough texture, to contrast a bit with the smoothness of the road. Like most things in modelling, in the end-result this will be hardly visible, but I will know it’s there.

After letting it dry for about 3 days, I applied paint and pigments until I was happy with the result:

Talking a bit about the medical crew, even though they initially had their own base, I decided to cut them away from it, as it would look weird on the diorama. The paint was much easier to apply than I initially thought. A bit unhistorical with the green, I admit, but I really like the contrast it has with the tank itself.

Some patchy static grass and it’s finally done. One of my favorite projects so far. Enjoy the pictures: 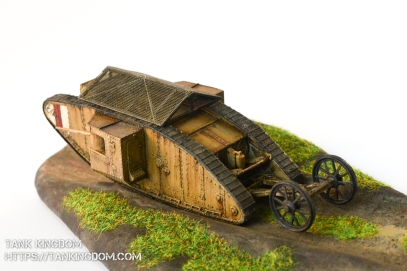 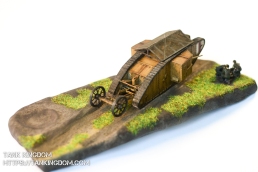 Did somebody say close-ups? 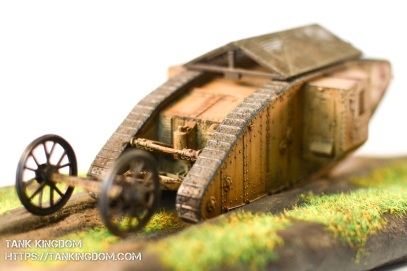 One thought on “Battle of the Somme Groupbuild – part 2”

This site uses Akismet to reduce spam. Learn how your comment data is processed.