I’ve been waiting to write this post ever since I started opening the box of sprues titled Italeri M60 Blazer in 1/35. 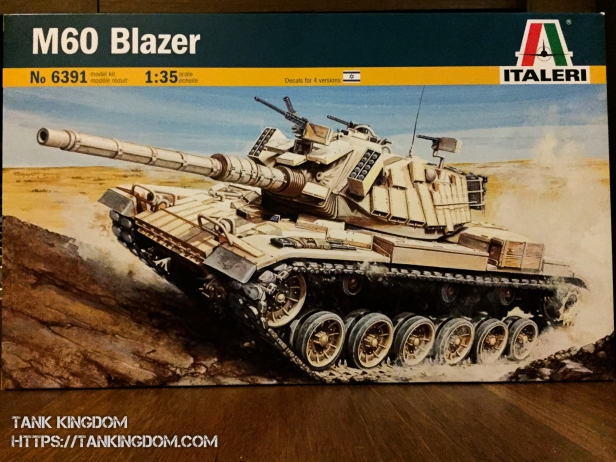 The huge amount of detail with crisp casting and little-to-no flash really paved the way towards making this my favorite project so far. At the same time, I tried to pay a lot of attention towards quality, towards producing a clean build. I made two mistakes which I will highlight later on, but other than that, I think the model turned out pretty nice.

A bit of history

The existence of this machine is a result of the long-term United States – Israeli military collaboration. This strategic alliance helped produce, among others, the always-recognizable Sherman M-50/M-51, popularly known as the Super Sherman.

After suffering heavy tank losses in the Yom Kippur War, Israel called for the help of their American friends. Operation Nickel Grass was a US plan of equipping the IDF with 22,325 tons of tanks, artillery, ammunition, and supplies. Among these, a newer series of tanks, the M60, as opposed to the M48‘s that the Israelis were using  until then (known as Magach 1-5).

After their arrival, the Magach 6 program was started, with several modifications being done throughout the years. I wasn’t really able to pin-point the exact model used as inspiration by Italeri, as most of them had just internal upgrades (engine, firing system etc.).

Getting back to the relationship between Israel and the United States, the two countries still represent one of the strongest alliances in the world:

Israel has the official distinction of being an American Major non-NATO ally. As a result of this, the US and Israel share the vast majority of their security and military technology.

Now that we know how this machine came to be, let’s see how the 1:35 version stacks up to its 1:1 historical counterpart. The kit quality is fantastic, apart from one of the sprues which, as far as I could tell, comes from Italeri’s M48 Patton. Too many Pattons cast from the mold, I guess, but it has a lot of flash. Luckily, there are not a lot of parts to be used from it.

Two things I would do if I were to rebuild this beast. First off I would get myself the photoetch enhancement kit from Dragon. Secondly, I would drop the 30 EUR price tag for the Friul tracks. I think with these two additions, the entire thing would be pretty close to perfection. Quite expensive, though.

Starting off this post, I was mentioning some build mistakes. All in all it doesn’t affect the end result that badly, but I should have paid more attention, especially for a kit I liked so much.

First thing I messed up is basically a beginner mistake, I’ve failed to level out the road wheels. Noticing it way too late and not wanting to rip things apart, I settled for fixing things in the diorama. Bonus points for actually finding the solution throughout the photos coming in part 3. 🙂

My second mistake is something that I actually want to highlight for anybody else building the kit and it’s related to the tracks. As usual with fixed plastic tracks, you get long prebuilt sections for the top and bottom parts of the track and single links for wrapping it around the idler and drive wheels. Problem is when gluing the single track links, if you’re not spacing them enough, you end up with needing a couple more links to join the ends. Luckily the kit comes with some extra track links for decorating the turret. The only issue with those is that they come without the rubber pads, so if you’re not hiding them underneath the hull (like I managed to do), it will surely look a bit off.

I would like to start out by admitting that I’ve been a coward. I bought myself a set of oil paints to try and weather the tank out, but since it would have been my first time using oils, I didn’t want to take a chance on them not playing nicely with the paint and clear coat layers.

Keeping it safe, after a coat of Vallejo Acrylic Gray primer, I airbrushed a mix of Vallejo Model Airs: Camo Black Brown with Gunmetal Grey and Rust as an undercoat. After letting this dry, I applied a layer of hairspray to allow future chipping. With this, the base was finished:

On top of it, I airbrushed my first ever attempt at color modulation, by using two more Vallejo Model Air paints, IDF Sinai Gray and IDF Sand Gray. Sadly, the result is not quite visible in the photos, but in real life it didn’t look that flat. 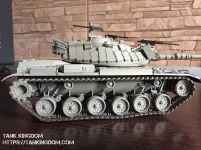 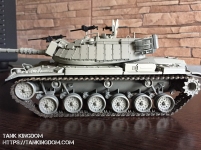 This usually happens with me and hairspray chipping, but I think I went a bit overboard. What can I say, it’s a fun process. 🙂 All that being done, I added some highlights underneath the scratches, to better, yes, you guessed it, highlight them. This is how it looks, in a diorama draft:

To blend the chipping with the remaining paint, I applied some heavy AK Interactive washes, for DAK vehicles and for producing rust streaks. One matte coat and some pigments later, this beast is now complete!

Take a look at some overview pics: 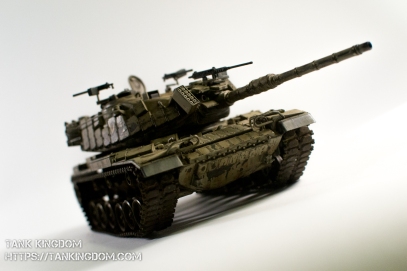 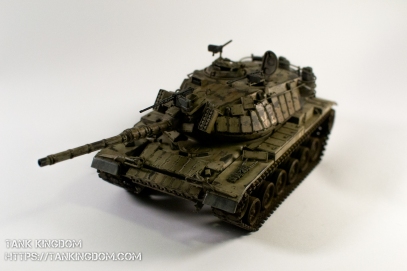 Followed by some close-ups: 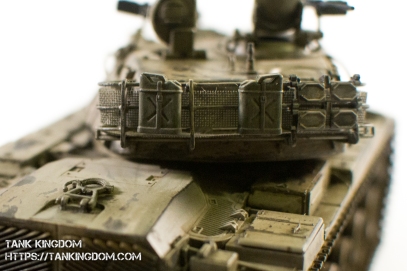 In the end, I want to thank r/ModelMakers for organizing this awesome groupbuild. At the same time, I want to congratulate all the participants on the great work-in-progress posts I’ve been seeing. I’m really looking forward to the round-up post.

This site uses Akismet to reduce spam. Learn how your comment data is processed.